After years in the making...and billions of dollars...you can stop laughing, because it’s really almost here—and this time we mean it. 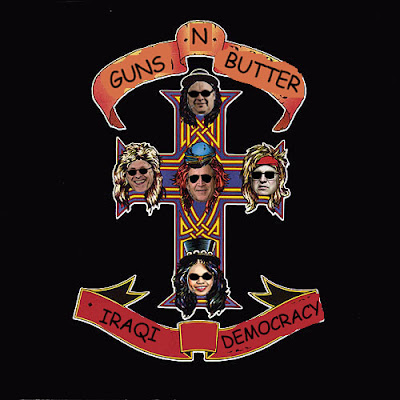 The heaviest, densest, most inaccessible production yet from the group that brought you Appetite for Obstruction and Abuse Your Delusions, this ambitious concept album tells the story of a man who brings the light of freedom to a land of darkness through conquest, capitalism, and Christ.

Anchored by the simple, repetitive riffs of rhythm guitarist Turd Blossimin' (who wrote most of the tracks), Iraqi Democracy delivers the sound patriots love and that freedom haters hate. Lead guitarist Condi spins her slithery, improvised solos where notes double back and often contradict each other. Bassist Richard "Dick" Cheney fires off heart-stopping runs that rise from the bowels of Hell and blast you in the face of your soul. Drummer (and sadly, former member) Rummy Rumsfeld obliterates the skins like they were requests for body armor. And above it all, singer W. Ahole Bush delivers his trademark brand of double-talkin' jive that is the scatting of the Apocalypse.

So turn up your radio loud enough for the NSA to hear and torture your neighbors until they confess to being a sleeper cell. Because when this band’s a rockin’, freedom won’t come a knockin’.

“It’s everything we hoped it would be. All the hard work, money, and sacrifice has paid off. A masterpiece of design, executed flawlessly. Only a traitor would hate this record.” —Spin

“Ambitious and daring, Iraqi Democracy sets the standard for all other works in the genre. Every bent note and distorted tone form a brick in the ‘Wall of Hubris’ sound. Essential.” —Geopolitics for the Practicing Neocon

“The aggressive, commanding first half is complemented by the more humble, yet equally powerful second half. Every perfect note rings true on this fair and balanced recording.” —Fox News

“This is not music for candy asses, carpet munchers, ragheads, Deadheads, traitors or haters. It's music for people who believe in American family values.” —Ann Coulter

“The greatest album ever to be in the current process of being presumably finished at some point.” —Tony Snow

“Like Cheetos for my ears” - Jonah Goldberg, The National Review

Coming tomorrow next week next month a few months from now at the end of the year next year next election next decade when pigs fly when the Iraqi Air Force flies soon.

Your posts are consistantly hilarious.

And apparently I consist-ENT-ly can't spell.

I can't see to write a decent comment. My eyes are tearing from laughing so hard.

This is so freaking brilliant. Just when I thought it couldn't get better, you hit me with a tracklist.

Civil War (Stop Calling It That)

I know Guns 'n Butter are heavy rocket-launchers, but I get a Motown (Mow-down) feel to that title. With Ann Coulter, Michele Maulkin and what's that other blonde's name? Can't remember -- singing back up to W. Ahole Bush.

Using their "stop in the name of love" moves....

Thanks, everybody. I had a lot of fun with this one. There might be more to come from this particular well -- I have a couple ideas for some other GnB stuff.

I like BG's idea for the backup singers. It would be hard to narrow it down to 3. You might need a choir.

OMG! Best graphic evar. I haven't even read the post because AG is still caught on the graphic!!!!

you were right about the graphic. i need to be checking this site more than four times a day so i can see this stuff right when it comes up.

this is a work of pure brilliance! deserves to be in the onion, or at least the garlic! ha! i'll be here all night, folks!

This would definitely be one of the Onion's better pieces.

But I heard it's only available on Reel-to-Reel???

Well played, Brando. My favorite part may not quite just about almost be the Tony Snow quote.

Awesome! Can't wait for the sequel