Last Friday, at 4 am, I woke up drunk for the first time ever. Surprising considering how many times I've retired with the room spinning, but I also usually don't pound shots of Jaeger when I have a 7 am flight to catch. I keep living but the learning part continues to elude me.

It was all my coworkers fault. Well, and my fault for not refusing the drinks they kept buying for me. Also, there may be video of me screaming "Crazy Train" at the top of my lungs at a bar. If it actually surfaces I will post it here, because I value entertaining you more than preserving my dignity.

1) "No Speak No Slave," The Black Crowes. The Southern Harmony and Musical Companion is severely underrated. The bar where said "Crazy Train" antics took place was a piano bar with a rock edge, and the band played "Remedy" at one point. The fired-up (or should I say lit up?) crowd kind of went silent while I was belting out, "Can I have a rem-e-dy?!!" One of my coworkers said, "What is this?" The question made me sad.

3) "Sovereignty," Japandroids. I just downloaded their Post-Nothing album off eMusic yesterday and have already played it a half-dozen times. Sometimes an album grabs me by the throat from the first play. This is one of those albums: A tsunami of fuzzed-up guitars, a drummer who treats his kit like it owes him money, and vocals that sound like someone who's trying to go off his meds. All from two dudes. Good, good stuff.

4) "Out of the Sinking," Paul Weller. It is tough, tough, tough to age gracefully in rock music, especially if you were once a punk. Weller's done just about as good as job as anybody. Sure, I'd rather play some old Jam than The Style Council or his solo stuff, but he still seems relevant and good. As opposed to, say, Johnny Rotten.

5) "Don't Damn Me," Guns N' Roses. Speaking of irrelevance. The Lovely Becky wrote a Facebook update that said, "I declare that all bad sequels should be removed from memory, and their storylines restored to the end of the last decent movie in the series." I think that should be applied to Chinese Democracy.

6) "Seek and Destroy," Metallica. I have been on a metal kick lately, probably because I started working out regularly again. Sullen indie kids and boopy eighties synth-pop (both the real thing and the new synthetic synth-pop) are fine and dandy for getting through another day in the home office. But when I'm sweating to the oldies, my oldies tend to wear studded leather.

7) "Waitress in the Sky," The Replacements. Paul Westerberg's kiss-off to airline attendants. Except now, with all the cutbacks to inflight service, there not even really waitresses any more. More like soft drink machines that can show you what to do in the event of a water landing.

Speaking of flying, when I had to wake up still soused for my flight, I got the tempting option to upgrade to first class for $90. I stood at the kiosk mulling it over, wondering if $45/hour was worth a big fat seat and a chance to sleep. I decided to be fiscally prudent and kept my coach class, which resulted in me sitting in row 30 next to the engine, squeezed into my seat like one of Dolly Parton's boobs into a B-cup. The lesson: always take the first-class upgrade. I spent the whole flight not only being tired and cramped, but pissed at myself for not making the obviously correct choice.

8) "Here Comes Your Man," The Pixies. It has the simple, carefree happiness that the best teenage memories are made of.

9) "Let My Love Open the Door," Pete Townshend. This isn't just a great pop song, it's so wonderfully crafted: The synths, the layers of vocals, the sprinkling of rock to keep it from being to schmaltzy. On my Cannot Be Overplayed list.

10) "I Shot the Sherriff," Bob Marley and the Wailers. Normally, a great song to listen to. However, reggae reminds me of summer, and this is reminding me that we haven't had a fucking summer all summer long. Two hundred inches of snow and now I'm getting 45-degree highs on June 1 and 65-degree forecasts for August 1? I never thought I'd ask for this, but pretty pretty please, can I have just one week where I sweat my balls off?

11) "Blood on the Motorway," DJ Shadow. Some of the trippiest trip-hop around. Nine-minutes of sampled yumminess that even includes a smatter of cheesy vocals four minutes in. Perhaps some day we'll see prog-hop?

Have a great weekend, and I hope you won't require a sweatshirt to stay warm.
Posted by Brando at 3:17 PM 7 comments:

1) Chronic Fucktardedness (we've got a fever, and the only prescription is more Krugman)
Posted by Brando at 9:22 AM 11 comments:

What are we being asked during our confirmation hearings?

11) Let me elaborate: why do you hate white guys?

10) Given that 106 white men have served on the Supreme Court, do you feel that you're receiving preferential treatment?

9) Related question: if Latinas are so wise, how come they have never served on the Supreme Court?

8) What do you hate more: white men or fetuses?

7) Are you afraid of our Caucasian-ness? Our natural non-heat?

6) If Rush Limbaugh and Pat Buchanan were trapped in an overturned car that was on fire, do you think you would be able to find the superhuman strength to flip the car over and get them out, or would your bias against white men prevent that?

5) Same question, but with Selma Hayek and Penelope Cruz in the car.

4) If you were a tree, would you be the kind of tree that would let a white family build a house out of her?

3) If you had a cat trapped in a tree, would you let a white firefighter get the cat out of the tree? Follow up question: what color is your cat?

2) We noticed that you're wearing a white cast on your ankle. Do you find plaster racist? What about white bones?

Real life (does anybody remember real life?) will be intruding for a couple of weeks, so posting will be (more) sporadic than usual until the week of July 27. In the meantime, I hope you are enjoying your summer as much as I am. 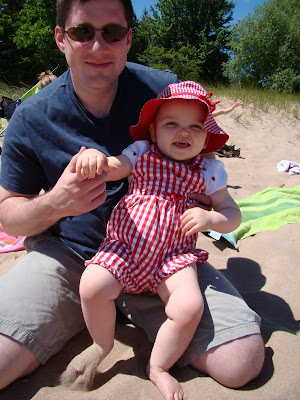 Yes, that's a beach. With sun and everything. In da UP. It's not all snowshoes and animal pelts here.
Posted by Brando at 10:15 PM 12 comments:

Labels: This is your captain speaking...

Top Ten Tuesdays: How are we improving our relations with Russia?

10) Playing The Scorpions "Winds of Change" during negotiations.

9) Having Obama and Putin star in Lethal Weapons, a buddy-pic about two world leaders who couldn't be more different trying to reduce nuclear arms. (Featuring Joe Pesci as Leo, the wacky translator!)

7) Getting drunk on Stoli and crank calling China.

6) Asking for Russian expertise in constructing a better gulag for our detainees.

2) Getting on all fours behind Iran while Russia pushes.

1) Offering them Alaska for free if they agree to take Sarah Palin with them.
Posted by Brando at 12:22 PM 6 comments: