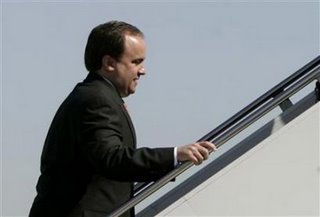 "That information is not accurate," McClellan said when a reporter asked what he planned to do after he resigned. "I am not resigning at this time."

"But you just told us that you are resigning," the reporter said.

"That’s unconfirmed," McClellan replied. "I would check your sources on that information."

"You are the source of that information," the reporter shot back.

"I don’t think you should be basing a story like that on one source," McClellan said, snickering.

Another reporter presented photos showing McClellan cleaning out his desk, as well as a cake that said, "Good luck, Scott," decorated with a pair of lips that had been zipped shut.

"Let me just clarify something," McClellan said. "I was cleaning up my desk, not cleaning out my desk. It’s just much easier to find things if you take them out of the drawers and put them in a cardboard box."

Regarding the cake, the potentially former press secretary explained, "I won a chance to win a car at a Wizards game, if I make a half-court shot. That’s what ‘Good Luck, Scott,’ means. There was supposed to be a basket on there instead of sealed lips. It was a confectionary malfunction made on the ground at the bakery. It did not originate from the White House."

Another reporter brandished copies of McClellan’s completed COBRA forms, which he allegedly turned into the White House human resources department to keep his health benefits active after leaving his job.

"That was a simulation," McClellan said. "We have an HR drill every month. I was simulating how I would leave, so that were I to do so, which I’m not, I would turn my forms in correctly so I could, in theory, keep receiving benefits, which I am, because I am still employed."

McClellan concluded the press conference by saying, "It has been a privilege and an honor to stand up here and not answer your questions." As he wiped away a tear, he finished, "I look forward to continuing to fulfill that duty."

Reporters later questioned President Bush about McClellan’s resignation. "Scott has the freedom to make that choice," the President said. "And freedom isn’t free. It’s quite expensive. As are Scott’s monthly COBRA payments.

"But if Scott were to leave, we do have several other parrots in mind for the job."
Posted by Brando at 12:47 PM

Why can't they break that guy? I can't wait for the wave upon wave of derision that will flow over him when he writes his tell all book, but only after nuclear armageddon.

Who's gonna replace him? I haven't heard. Must go-a-googlin' --

(My husband thinks no one will replace him -- that they're gonna shut it down...)

All that's really going to happen is that the McClellan 3000 will be upgraded to the McClellan 4000, which sports a death ray and disguising mustache.

The missus and I were discussing this over dinner, and we were saying that it takes some doing to make you go, "Gee, I sure miss Ari Fleisher."

Heck of a job, Scottie.

That is so classic Republicans in the WH today. Just imagine for a moment if you will, what will be writtne of the 8 wasted years of GWB in children's history books. It's stories like Scottie's that just make your mind go long on what could and will be said.

Wonderful snarky channelling of the McClellatron. Hope it didn't damage any brain cells!

AG, I think that book will be called, "My Pet Bush."

manxome, I have installed several mental firewalls to protect me from getting damaged from reading or writing about conservatives.