or Paradise (Lost) by the XBox Lights

I recently brought a bad, bad thing into my home. Something that could destroy my marriage.

No, something far more adulterous, additive, and abominable...Guitar Hero II for the XBox 360. 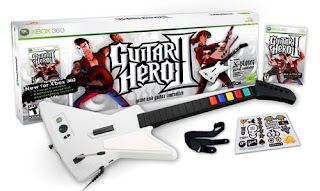 The game has been out for the PlayStation 2 for a while, and last Thanksgiving, I played it on my brother’s PS2. I could name that addiction in four notes.

“Oh, sweet Jesus,” said The Lovely Becky, who saw the writing on the studio walls.

Finally this week, this plastic manna fell down the Stairway to Heaven and onto the XBox 360 .

So what is Guitar Hero II? It depends on who you ask. The publisher, Red Octane, calls it a “game” that “creates the sensation of being a rock star, as you rock out to 30 of the greatest rock anthems of all time.” My wife calls it “the nerdiest fucking thing I’ve ever done,” which is impressive considering how long she has known me.

The game is pretty simple in its execution. You play along with the above mentioned rock tracks. On screen, a giant fret board scrolls notes toward you as the song plays. You simply press the colored fret buttons in sequence and tap the strum button in rhythm with the song. To get bonus points, you can add “star power” by tilting your guitar upward at the right moment (an action which prompted this exchange between me and my lovely wife).

It sounds stupid. It looks stupid. It should be stupid. I am, after all, 36 years old, and a grown man banging away on a Fisher Price toy in time with Warrant’s “Cherry Pie” should unleash power chords of shame and ridicule. You could have the looks of Brad Pitt, the coolness of George Clooney, and the whammy bar of Milton Berle, and there’s no way in hell any woman would tune you in, let alone pluck your G string, when you’re wearing a toy guitar controller around your neck.

But God help me, it’s the most fun I’ve ever had playing a videogame in my long, unillustrious history of videogame playing. Even more shocking, it doesn’t involve shooting, stabbing, sawing, gnawing, disintegrating, atomizing, dungeons, dragons, Italians, or monkeys. Just good, clean fun that goes to 11.

The irony is that, while Guitar Hero poses a grave threat to my matrimonial bliss, my marriage also saves me from Guitar Hero. The guitar's anti-sex matter coupled with TLB's snark form twin guardrails that prevent me from swerving off Nerd Boulevard and into the Gorge of Eternal Geekiness. Because without my marriage, I could turn out like these guys:

Not the cape, of course. Well, probably not the cape. Okay, maybe if there was a Yes song....
Posted by Brando at 9:18 PM

Do you consume anything in particular to help you bounce from an Egyptian afterlife mixer to a Guitar Hero II epic performance?

I don't know if they'll be enough to save your marriage, but I give you several bonus points for the subtitle.

Oh dear lord... I'm not sure whether to laugh or cry.

Jennifer, feel free to do both.

Thanks, Brendan, I liked that too. The lit reference was specifically for TLB.

MT, I am merely a dinghy in my raging stream of consciousness. No additives or preservatives are required.

TLB, divorce him for this one!

Sadly, AG wasn't mentioning this because Chuckles and dEn will want it!

And Schmoopies: the answer is NO!!

I guess I've already admitted on my blog that I understand its appeal.

Have you ever been Lars Umlaut? I love how he raises his RAWK! fist before every song.

dontEATnachos is afraid to play it on his massive high-def television in low def.

This game is brilliant and one of those guys in the video is pretty bad. Iron Man is a pretty easy song until the solo and one of them was cocking up royally.

You can pretty much substitute the word "Zelda" for "Guitar Hero II", and "Wii" for "Xbox360", and you have written my life story in toto. Well, except mine does include dungeons, dragons, and monkeys...

Oh no, Cupcake! If you want to sleep in your own bed, the answer remains NO!!

Hissssh to Brando for exposing this.

And funny story with regards to what Fishstick said -- AG saw UC's bar mitzvah video lately. Swear to goat cheese, there is some chubby little Canuck geek who says on the video, "UC, I want to know when we are going to finish that game of D and D."

AG wanted to die! This is what she is dating!