The Day the d20 Died

Gary Gygax, creator of Dungeons and Dragons, died this week. Chuckles and many others have posted about Gygax and the impact of his game on their lives. Reading all those tributes got me thinking about my D&D days, the time between the ages 11 and 15 where I immersed myself in the universe Gygax created. So I decided to dig out the Dork Box.

The Dork Box has my dork stuff in it. My undergraduate history thesis, academic plaques and honor society certificates, and weird books like The Book of the Subgenius and Drew Friedman comic collections. Mostly it's a shine to D&D. The Dork Box houses all my old D&D books, kept safe like the pieces of the Ten Commandments. There’s also a container with my lead figures. And then there’s The Binder.

Nearly falling apart, The Binder has my characters, my adventures, monsters, deities, maps, and more stuff I spent hour after obsessive hour creating, holed up in my room listening to prog rock while drawing on graph paper and thinking of names that sounded like bad Tolkien rip offs. Like a lot of D&D players, I created a lot of characters, but one stood out among them (click to see it in larger 1982 glory): 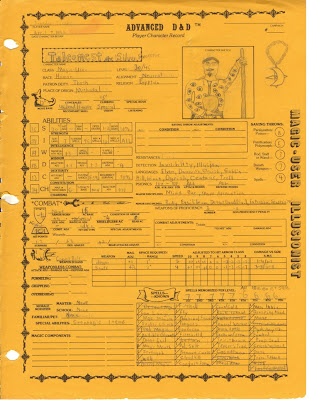 That’s Talcomest the Silver Sorcerer. He fought enemies by spraying them with a dry powder that sucked all the moisture out of them and got all over their armor. Okay, maybe not. I played him throughout most of my D&D career. He had a crystal ball that doubled as a telekinetic whoop ass machine, a sphere he could launch at enemies like a wrecking ball. Talcomest fought, at various stages of his career, a scarecrow in an Oz-based adventure who could fire pieces of straw that could pierce plate mail; fanatic minions of the evil Egyptian god Set; and, in a series of adventures that lasted two years, a chaotic demon named Tadwaeld who Talcomest chased to Limbo and back.

When I wasn’t playing, I made my own adventures. Most of the time I didn’t ever get to use them, because my friend Tom almost always was the Dungeon Master. But I loved getting out the graph paper and writing the back stories, the villains, the traps, and the monsters that would await adventurers. This is “Quest for the Dragonstar.” I was probably twelve or thirteen when I wrote this:

Centuries ago, a powerful Dragonlord named Correllia created a magical amulet with power bestowed to her by Tiamat [the big seven-headed dragon god, for those of you who haven’t memorized the Monster Manual and/or Babylonian mythology]. The amulet was called the Dragonstar. With it, Correllia rose to power. She raised an army of goblins and bugbears [goblins on Goblin Growth Hormone] and xvarts [don’t ask]....She captured Sterken, the capital of Mordain, and marched toward Esberniam [you can’t having epic adventures without geography]. However, Elvish, Human, and Dwarvish armies called from Moria [Tolkien lawsuit] pounced on and slaughtered her army in Eskar. However, Correllia and the Dragonstar escaped.

A fantasy novelist prodigy I was not, although that passage makes more sense than the Conan movies. It also illustrates why Tom was the DM.

Just like you need geography to have epic adventures, you need graph paper to make a dungeon (click to see every pencil stroke): 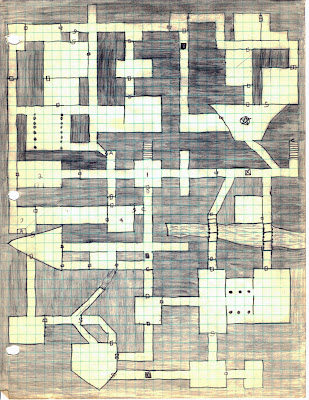 Note the pentagram in the one room. Why a pentagram? Because pentagrams are tits when you’re twelve.

So why did my love for D&D come to a grinding halt? A very simple explanation: I saw adult role-playing gamers for the first time.

The summer after freshman year of high school, Tom and I went to a gaming convention. We were excited about having a chance to show off our cunning and ingenuity against other D&D players. I’m not sure what I expected to encounter, but I suppose I figured the other players would be like us: dorky but not overtly nerdy kids.

Instead, we walked straight into a convention of Comic Book Guys. Grown men in convention T-shirts and navy slacks and generic sneakers, arguing about rules, showing off lead figures, and clearly putting more obsessive effort into this hobby than we ever had. It was like walking in on your parents dropping Ecstasy and going to a rave.

Taking our place our tournament table, we watched as our Dungeon Master lumbered toward our table. He had the round physique of an ogre, and he carried a bucket of dice. Hundreds of dice. Hordes of the colorful gem D&D dice, legions of the cheap plastic kind that came with the Box Set, and a multitude of traditional dice from board games.

The dice epitomized what we were thinking about the convention in general. There was no reason for someone to own that many dice, except to show off how many dice they owned. The obsessive need to purchase that many dice, and find a sealed container big enough to carry them, and own a stack of DM paraphernalia, and argue over obscure rules at the back of the Dungeon Master's Guide, all of it made me think of one thing: if I continue on this path, I will die a virgin.

After that convention, Tom and I quit D&D.

I missed it almost immediately. But by this time, I had moved to the other side of the country, and my new high school friends didn’t play D&D. I remained D&D free until I got to college. My dorm mates and I got on the subject one drunken night, and it turned out all of us had played and given up the game for mostly the same reason: it seemed too dorky to get us laid. By this time, I had guaranteed I would not die a virgin. In fact, all of us were no longer virgins. Why not start playing again? The other guys agreed, and during winter break, we grabbed all our shit out of our Dork Boxes and brought it back to campus.

I got to DM this time, and while on break, I wrote a new adventure, The Grey Tower. It involved the party traveling to an abandoned keep to search for an elixir of youth. I devised riddles and created traps and pored over the books for monsters to use. When we returned, we gathered in our dorm rooms and played the adventure over several nights. It was a blast, and before the adventure ended, we already talked about our next one, and how we would rotate being the Dungeon Master.

The last night, nearing the explosive, undead-strewn end of The Grey Tower, a couple of our female friends stopped by our room. They knew we were playing D&D, but hadn’t actually seen it happening. They proceeded to unleash a Prismatic Sphere of Mocking, and we all failed our saving throws. I felt the embarassment of the convention returning. Somehow, they got hold of The Binder before they left. When I got to the last page my carefully scripted adventure, I saw this scribbled across the top:

Jesus Christ, Brando! Where’s your cape? In the wash?

And with that, my D&D career officially ran out of hit points.

Rest in peace, Gary Gygax. You made an awesome game, even if the girls made fun of us for playing it.

I love this post. So funny and so poignant. And with visual aids as well! Pinko will be so jealous.

I just got an email a few days ago poking fun at two of the guys who hang out at the Dublin. It asked us to express our condolences and ended like this:

"It's because of the Father of All Dorks Brad and Paco are able earn charisma points they would not otherwise have. Don't even get me started on the experience, dexterity, and strength points."

May he rest in peace.

I wasn't into the D&D (I chalk that up to my girlishness) but I do know the pain of what happens when nerds get income and spend it on nerd things. It ruins it for the kids. Unless you're talking about the LOTR extended DVDs, of course. Those are works of art.

Because pentagrams are tits when you are 12.

No truer words have ever been spoken.

I named all my magic users Bruce.

What a great post, Brando. My D&D career was shorter (pretty much junior high only), less creative, and certainly not archived in any manner. I would continually get frustrated starting out by the rules and having my adventure end when I would get killed by a rat or snake or something lame like that, so cheating happened and it happened copiously.

Quitting the game did not help me get laid, but did open me up to a new variety of excessively nerdy and equally virginizing interests. I still think back very fondly on the game. I loved the details, the rules, the possibilities, and the imagination. I can't imagine Harry Potter without D&D.

You should've gone after the girls who were busy playing Adventure....

I'm with Donna - you were just hanging out with low quality girls. My girlfriend and I used to joke about our low will saves the first couple times we made out.

donna and dudley, you are both right. If only my Wisdom then had been what my Wisdom is now.

Playing the 'Tom' character in Brandon's D&D opus presented unique challenges. My 13-year old body was beginning to be ravaged by puberty (think zits, sunken chest, and perpetual boner). Fantasy escapism was so appealing, but as Brandoaf articulately explored in this riotous post, D&D and virginity were in a way circular self-fulfilling prophesies. Thank you B for losing your virginity first and giving hope to this gangly teenage heap of unsightly joints. Learning through you that there was 'another way', my new odyssey for girl flesh eventually ended up successful. Indeed, even better than 'checking for secret doors' and finding a 'bag of holding' containing 'mithril armor'. (Ahhhh, mithril)

PS, technically, Talcomest had a 'sphere of annihilation'. And if God is just, I will likely spend the next 2 weeks unlaid.