Behind the Rock Band

I have always been fascinated by the drums. I wanted to play them when I was a teenager, but economics and the confines of sharing small houses with five other family members made that impossible. So when I heard that a game called Rock Band was coming out, and that it would do for drums what Guitar Hero did for guitar, I had to have it.

For months, I dropped hints to my wife, The Lovely Becky. She would always shake her head and give me her best how old are you look. But she never said no.

One day, while shopping with her at Target, I spied the box on the shelves. It was big, bulky, and geeky. I saw my chance to tell Santa what I really wanted.

Pictured: Rock Band Bundle
Optional ridicule included
"Hey look," I said with trembling nonchalance. "They have Rock Band in stock. Huh, I thought those would be all sold out."

The Lovely Becky let out a sigh, a long breath that signaled her acceptance that resistance would be futile. "Is that what you really want?"

"I was going to get it for you. You don't mind if you're not surprised?"

"No!" Several dogs howled at the sound of my squeaking excitement.

"Put it in the cart. But you can't open it until Christmas."


II: Father Christmas, Give Us Your Game Peripherals

I waited and waited. And after Christmas, waited some more, until we could return home to the Xbox and I could play the game. The Lovely Becky sat on the couch and watched me open it up. "Can I play it?"

She rested for four full measures before agreeing. "Go ahead."

Rock Band includes a guitar and microphone, too, but I was all about the rhythm stick. I set up the drums. 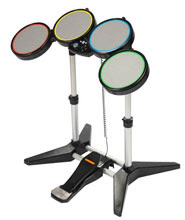 Pictured: Rock Band drums
Rhythm not included
I hooked everything up, plugging the kit into the USB port on my Xbox. I created a drummer character, Branimal, a bearded, red-headed skin basher who would rock me to the top. 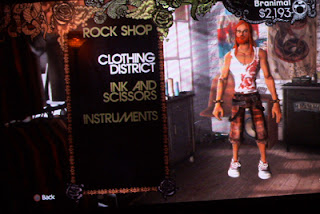 Pictured: Character creation in Rock Band
Spouse's loss of sexual attraction included
The game loaded and I selected Weezer's "Say It Ain't So," the easiest song to start with. I played the easy level, getting the hang of the bass pedal and finishing the song without too much trouble. At one point, when I was doing well, the virtual crowd started singing the song back. It was more invigorating than a grown man should admit.

"You have no idea how much happiness this is going to bring me," I told my wife.

"Actually, I think I do," she said, shaking her head.


III: I Want to Rock n Roll All Nite, and Play Xbox Every Day

Nietzsche once wrote of man's eternal struggle with rocking, "Don't need nothing but a good time. How can I resist?" And indeed, how could I resist? I was having more fun than I had ever had with a video game. I bumped up the difficulty on the drums and rocked out with a fierce competence somewhere between Micky Dolenz and Meg White. I passed song after song, crossing cities and venues and genres as I played "Wanted Dead or Alive" in Chicago, "Gimme Shelter" in New York, "Epic" in Boston, "Blitzkrieg Bop" in L.A., and "Paranoid" in Seattle.

The crowds roared. I acquired money, fame, prestige—or I should say that Branimal acquired these things. Truthfully, our personalities were beginning to merge, much like Garth Brooks and Chris Gaines. I began living the Rock Band lifestyle, partying between gigs. The whole experience was intoxicating. 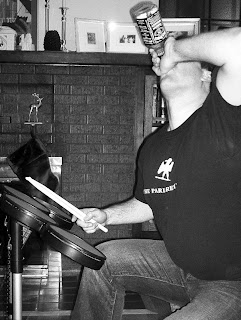 IV: Welcome to the Boss Level, Baby, You're Gonna Die

I had it all. I was playing—actually doing something the mimicked the drums. I nailed the songs one after another, getting four and five star ratings with ease. My rise was meteoric. I was at around minute 27 of my own Behind the Music special. But little did I know there were a dark 33 minutes to go.

I kept playing more and more. The songs became more complex. The pressure to do well mounted. I needed a little something to take the edge off. 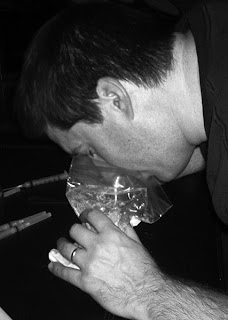 Pictured: White Thunder chasing white lightning
Paranoia included
Then in Stockholm, it happened. I took on "The Electric Version" by The New Pornographers. The off-kilter rhythm and complexity took me by surprise. I made it halfway through before, amid the hostile Viking boos of Swedes, I failed the song. The music went dead and I was left dejected.

I went into practice mode, slowed the beat down, and figured it out. I returned to the stage and gave it my all. Yet I managed a paltry three stars, a mediocrity that sent me into a Grand Funk, especially after I saw this guy dominating a Metallica song on Expert. Would I ever be that good?


V: The USB Port and the Damage Done

I managed to get through the other Stockholm gigs, except one, the final song: "Green Grass and High Tides," by The Outlaws, a Freebird-esque southern rock stomp that was as long and difficult as the Iraqi occupation. The last extended solo, when the drums kicked into overdrive with a rhythm I couldn't keep up with, beat me down in 4/4 time. I retreated to my couch and tried to find some concoction that would make the notes slow down and my foot speed up. But nothing worked. Every time I hit that second solo, I failed. Soon I didn't even care about trying. I just wanted to make the pain go away. I hit Rock Band bottom. 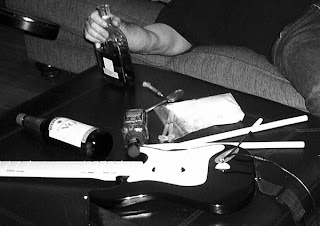 Pictured: The unlocked Keith Moon level
Rehab not included
VI: Baby, We Were Born to Restart

I was strung out, hung up, upside down and inside out. Is this what I had wanted during that fateful stroll through Target? No, I just wanted to play along with my favorite songs and have a few laughs. Instead I was lost in a world of high scores and five-star ratings and unlocking that next level. I had forgotten that Rock Band is about the music. It was an epiphany, like when KISS put their make up back on and stopped playing every song they recorded after Destroyer.

So I have a new lease on life. I quit chasing perfection and let Rock Band be a game. I do the best I can, and if that doesn't work, I just try again later. I even gave singing a shot, making a new characternamed Branzig. I even did okay on the vocals. Most of all, I had fun, which is what Rock Band is all about.

Just be careful, because this game is so fun, it's like crack.


No bloggers were harmed in the making of this post. Some events have been dramatized to make them seem more rocking and less dorky than banging on plastic drums in front of your cats and God. All drug paraphernalia is legally purchased and not used for anything at all unsordid (honest, I have the prescriptions!). Branimal is the legally created nickname coined by my brother Tickle during a poker game where I was playing with uncharacteristic aggression. This post was made possible by the TLB Foundation, dedicated to giving husbands with Peter Pan complexes a chance to live their nerdy ass dreams. It's the best foundation in the world.
Posted by Brando at 12:59 PM

I had my small victory when in GHIII I completed "Story of My Life" without missing a note on easy level. My children mock me for my pathetic lack of skillz.

Excellent. "He's off the drugs and high on life!!"

I play all of "Story of my life" too, on my acoustic. I hit ALL the wrong notes. Sing crappy too. I'm sure Mike Ness don't mind.

I'd guess you already knew that.

I hit ALL the wrong notes. Sing crappy too.

Story of my life.

call me when youze gots blisters on your fingerzzzz

Awesome! I'm hoping, though, that this does not mean the end of the air drum solo. That would be tragic.

Happy new year to you!

I had to read this again since I had tried to read it the first time in Grizzled's office and he was being rude and asking me to give his computer back...

This made me spit out my coffee. :)

Brando- I had a lovely Ludwig drum kit in high school, but had a terrible teacher. I think my high point was playing along with Micky on "Mary, Mary". I sold it at some point, figuring the money would do me more good, but the dream of drums still lingers...

Holy shit, I think I need an Xbox.

No one understands that obsession better than me. All I can say is, stay far away from Beautiful Katamari. I'm not kidding.

I don't want to say anything except for how awesomely funny this post was and how much fun Rock Band sounds.

Oh my gosh, Brandle, Branzig... BRANIMAL! I can't tell you how many times I've read this now and every time I have to cross my legs to keep from peeing my pants!

It's been eight years since I wrote this, and I spent my Christmas vacation in 2015 bashing away on Rock Band 4. I have never been so grateful for the return of a videogame franchise.