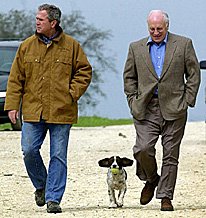 Accusers say Cheney would sometimes eat pets right behind the backs of their owners, often blaming "coyotes" or "illegal Mexicans" for their disappearances.
WASHINGTON, DC - With the White House still buzzing from Vice President Cheney’s accidental shooting of a fellow hunter, a new scandal emerged today as Mr. Cheney was accused of eating a live puppy.
The incident happened on a "puppy farm," a facility where puppies are born and prepared to be sold. Mr. Cheney has been known to take wealthy GOP donors to these farms and offer them their "pick of the litter" as a reward for their campaign contributions.
At approximately lunchtime yesterday, Mr. Cheney and Melvin K. Whipplethorp, a Texas oilman and Bush/Cheney campaign donor, were visiting the Perfect Pooch Puppy Farm. Mr. Cheney had offered Mr. Whipplethorp a puppy as a sign of his gratitude.
While eating lunch at the farm, the Vice President ingested the floppy-eared, doe-eyed, pokey little black-and-white puppy that Mr. Whipplethorp had picked out.
Mr. Whipplethorp, while rumored to be "traumatized" by the event, could not be reached for comment. The Vice President’s office only released a terse statement. "The Vice President and his guest were having a lunch of pigs-in-a-blanket when the Vice President accidentally consumed a dog. He sincerely regrets the incident but is adamant that it was a mistake."
Wes Minster, owner of the farm, backs up the Vice President’s claim. "The Vice President’s been coming here for years, and I have never seen him eat one of my dogs. He’s lost a few, sure, but he’s always paid for them right away, almost three times what they’re worth."
Confusion also prevailed when Mr. Cheney failed to inform the media or the White House about the incident. At a press conference, when asked if the Vice President had "eaten a dog," White House Press Secretary Scott McClellan joked. "Probably. He eats them all the time, especially at the ballpark. Just don’t ask him to pass the Grey Poupon."
When reporters expressed surprise at the response and offered more details, Mr. McClellan replied, "Wait, he ate a puppy? A (expletive) puppy? Jesus (expletive) Christ, that’s it, I’m (expletive) through." He left the press conference without answering further questions.
Culinary experts also dispute that the Vice President could mistake a pig-in-a-blanket—a hot dog or sausage wrapped in dough and usually served at Midwestern functions—for a live puppy. "For one thing, the puppy would be considerably furrier," said Dr. Carolyn Terrier, the Appleby Bennigan Chair at Cornell University's Department of Yumminetrics. "And, while I can’t prove this, I would assume the animal probably moved and/or yelped when the Vice President bit into it. That would be a dead giveaway."
Furthermore, additional accusations of the Vice President feasting on cute live animals have begun to surface. One former servant at Camp David, speaking anonymously for fear of being accidentally shot, said the Vice President began many mornings with a breakfast of "Hamsters Benedict." Another accuser, who wished to be identified only as "Mary C.," said she had once seen the Vice President eat a litter of kittens. "He put them in a sack, and I thought he was going to drown them, which was bad enough. But then he put some onions on them and scarfed them like White Castles. It was my worst birthday ever."
Filmmaker Michael Moore has also been investigating accusations such as these for his new documentary, Hang Gliding for Hasenpfeffer. The film opens with a montage juxtaposing the Vice President licking his lips with the rabbit scene from Fatal Attraction. "I think it really hurts our image abroad if members of the Executive Branch are snacking on adorable animals," said Mr. Moore.
The Vice President dismissed the accusations as "rabid nonsense," just before departing for the National Zoo to see the newest baby panda up close.
Posted by Brando at 2:23 PM

Where in Iowa? I used to live in Iowa City when I was there for University. It is by far the coolest town in the entire state of Iowa, hands down.

What are you talking about? Tina Fey, of SNL fame?... she's smoking hot!!

If Truth Seeker Michael Moore is making a movie about it, it must be true!

Daniel, my good man by saying "uglier than Tina Fey" under About Me, I mean I am uglier than she is...not that she is ugly.

I am an IC resident and agree that it rocks.

I don't know why this should distract us from the more important stories of the day, like Air America stealing the petty change out of the receptionist's drawer at the local SPCA. And that story is true; I read it on NewsMax.

NewsMax is teh shit, teh. They're always doing things like telling you Business Secrets Liberals Don't Want You to Know. It's also my #1 source for Clenis Coverage.

Did you catch the NPR coverage of the victim? He was all, "I am sorry to you, Mr. Cheney". I was like, WTF?! Some dude shoots you and you're sorry?! Are you from Toronto or something because Americans aren't like that.

Awesome. I hadn't read this one before; glad you linked back to it.

Question, though: where's the part about how Mr. Vice President waited about 2 days before he told anybody what he did? This would make more sense; clearly, Cheney would defer to the vast PR department of the Perfect Pooch Puppy Farm.

Because America can't win the war on truth if it has no time to come up with a good lie.

greetings to all.
I would first like to thank the writers of this blog by sharing information, a few years ago I read a book called costa rica investment in this book deal with questions like this one.