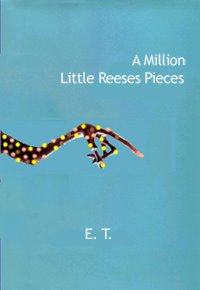 "Much more honest than any other best-selling memoir you’ll read this year!" Kirkus

"I believed every word of it!" Judith Miller, The New York Times

"I laughed and I cried, so it must be real." Oprah Winfrey

"Now we know the real story behind the Spielbergian cover story." Oliver Stone.

This harrowing tale of addiction, friendship, redemption, and interstellar travel begins with a groggy E.T. waking up in a military lab, not knowing where he is, where he is going, or even what he is doing on this strange planet. All he knows are three things: that he is an Alcoholic, a chocolate and peanut butter Addict, and an Alien. Through the extraordinary friendship of two children and his own inhuman ability to conquer his demons, E.T. manages to not only "phone home," but dial straight into our hearts.

I wake to the drone of oxygen being pumped into my bubble and feeling something warm dribbling down my chin. I lift a hand to my face. My finger won’t glow, my skin is gray, my ass feels like it had a scientific convention inside it, and my bulbous eyes are swollen shut. I open them and I look around and I’m in some kind of Hospital or Lab. I’m covered in a colorful mixture of malt liquor, peanut butter, chocolate, and formaldehyde. There’s a pair of kids standing next to me. Blonde girl. Cute. Lispy. Boy. Brown hair. Whiny. Earnest, but kind of a pussy.
Where fuck is E.T.?
You’re in a military hospital.
How E.T. get here?
A doctor and a bunch of men in scary costumes brought you here.
Ohhhh.
We have to get you out of here!
Nowwww?
Yes, before they come for you. We have to get you home!
Home. Now I remember. Phone home. Speak and Spell. Texas Instruments. Mom and Dad.
I try and stand. My legs give. It’s a short trip to the floor.
What’s the matter?
E.T. no walk.
Come on, just get to the flap.
Flaaap?
Over there.
Far. E.T. no can do.
Lispy girl reaches into her pink My Little Pony backpack. Pulls out a flask. I drink.
Mmmm, Beam.
The whiskey burn takes the express to my stomach. Gray skin turns brown. My stomach glows. More Beam, more glow. I’ve got a bellybutton lantern going. My finger lights up like an inmate’s last cigarette.
I make it to the tent flap. Whiny kid gets his bike, lifts me into the basket. He hoists and I hurl over the side, just a little bile.
Bye-bye, E.T., Lispy Girl says. She takes a swig of the flask.
Bye-bye. E.T. come back when you 18.
Whiny kid peddles like a champ, like he’s Lance Armstrong. I’d tell him that, but the kid won’t know who I’m talking about for another twenty years.
There’s jeeps and soldiers and guns behind us. The booze is kicking in now, and I get us up over the trees and leave the assholes behind. Kid looks like he’s going to shit himself.
Don’t worry, kiiiid, E.T. not fall.
We touch down in the woods. Pine needles cover the ground like nature’s opium den.
Are they coming for you?
E.T. hope so.
You don’t know?
No.
What if no one is here for you?
Shut fuck up and chilllll. They will come.
Lights. Bright. Sky. Down. Here. Ship. Opens. Mom. Dad.
Mom cries. What happened?
Long story, need 115 minutes to telllll.
She leans over and tries to give me a hug. I push her away.
Need get out of here, Mom. Men commming.
Dad pulls me. I turn to Whiny Kid. He’s not so bad, even if he’s blubbering like a girl. I give him a Glow Finger.
Be gooood.
Blast off. On the ship. I lie. Down. Dad talks.
You okay?
No, not okay.
Do you need anything?
Peeeeanut butter. And chocolate. In candy-coated shelllll.

Customers who bought this book also enjoyed these other 100% true memoirs:

A Million Little Pieces of Ass from Morgan Fairchild, Whom I’ve Slept With, by Tommy Flanagan
My Friend Leonard, Part 6, by Bill Cosby
Tuesdays With Royalties, by Mitch Albom
The Hitler Diaries, by Konrad Kujau
There’s a Sucker Born Every Minute, by P.T. Barnum
Posted by Brando at 12:26 PM

I want my money back, dangit.

I know, I know, teh, ever since I heard the news, I've lost the will to stop sniffing glue.

That book cover is 100% brilliant.

nice props from bookslut, brando. good thing you've mastered photoshop. now if we can only get your poker game up to speed...

Damn you! I love ET. It breaks my heart not knowing whether he and Elliot kept in touch. Did they go to summer camp together? What's to become of their friendship? And Gertie. Poor innocent little Gertie. Damn you for talking smack and sending him to the lab.

I'm sick of all you playa-haters trying to tear ET down!

You left the Old Testament, New Testament and Koran off the recommended book list.